Other People’s Money – OPM – is a crucial component for improved performance. Using debt to acquire productive assets allows for higher returns on your invested capital. The logic is sound and the returns on invested capital are, indeed, attractive. Similarly, publicly-traded companies have found OPM to be a tremendous tool to improve short term price through debt-financed stock buyback programs or mega M&A deals 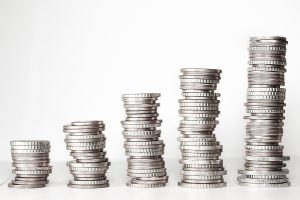 Given that world currencies are not backed by tangible resources, the money is only worth the trust we place in them. As debt levels increase past reasonable levels, debt quality deteriorates and, as a result, the real value of currencies gets thinner.

The last financial crisis led to slightly more stringent regulations on financial entities, which in turn, led to increased usage of nonbank funding and other off-balance sheet structures making it harder than ever to really gage the full leverage of financial entities and some publicly-traded companies. The bottom line here is that once again, debt has become the go-to tool for short-term gains, used -oftentimes- irresponsibly by many (most?) actors of the World’s economy – Governments, Corporations, Financial Entities and Households alike.

So no debt, then?

Don’t get me wrong, using other people’s money to create value is a good thing, my question is, how do you define creating value? Is it logical that US publicly-traded companies have spent more in 2018 in stock buyback programs than in capital expenditures, a year where the Dow Jones index set 11 closing records?  Sure, CapEx may no longer be as needed in mature large cap companies as it used to be in their growth stage, but is a stock buyback really the best use of a company’s money to position it for future growth? In the age of the politically correct where each and everyone of these companies like to boast their corporate social responsibilities with PR stunts, couldn’t they have found a better use for some of this money to help empower their employees and local communities in ways that also create long term value for their businesses?

Let’s run into the wall and see what happens… 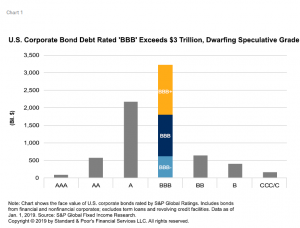 The Global Debt levels as such are not necessarily the problem, the real problem is that, history has shown us repeatedly that when all is well, people tend to feel overly optimistic, thinking that bad things only happen to others, and slowly ignore the very real and tangible risks around them.  Now is one of these times. We are in the longest bull market on record -10 years since the last recession- and even though everyone now expects a crisis, the economy remains relatively strong.

Looking at macroeconomic trends and ratios, we see more and more red flags, such as the debt levels discussed here; or the fact that there’s $7 trillion of corporate debt outstanding rated BBB -more than half of it in the US, of which a third has a BBB- rating; or the fact that the sector with the largest amount of BBB debts is Financial Institutions. 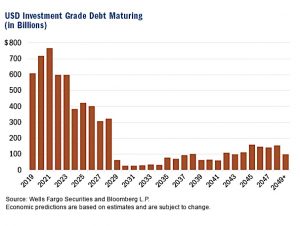 Naturally, blind optimism also does not worry about the fact that BBB rated instruments, beside being the largest category of debt outstanding, also represent 58% of the nearly $3.3 trillion in debt set to mature between 2019 and 2023. Meanwhile interest rates are on the rise… and yet, we continue to see companies pissing away their reserves buying their stocks at record high prices or acquiring competitors with little to no strategic or financial value without deep cost-cutting exercises.

So, to conclude, I’ll reiterate the original question.  In a world where debt gets created out of thin air faster than economic growth, is OPM really other people’s money?