Leverage Buy-Out, or LBO, is often depicted as a nifty way to package large transactions with limited risks. In the recent years, we see, hear and read about it all the time in the news with multi billion Dollar deals involving an obscene amount of debt.

Don’t know what I’m talking about? Alright, here’s a recent news of that sort – Petco being bought out by buy-out shop CVC for an enterprise value of $4.7Bn, of which $3Bn will be through debt financing. Now, given Petco’s history, having gone through such transactions various times, with dividend recaps in between, it’s hardly a news anymore that the company is over-leverage. And best of all, the company has proven once and again that it is strong enough to be able to service its debt without any problem.

With Mitt Romney running for office not long ago, these investment strategies became even more publicized, mainly negatively, pointing out impacts (whether real or imaginary) on jobs and other components of the economy. I’ll link to one such article here, in case you’ve been living under a rock lately but a quick Google search will give you thousands more.

Now, my issue with LBO is that it has become some popular that it almost became the only alternative in the minds of many investors, smaller and less experienced investors might I add. As a result – and as a result of the uncertainty and drastic movements witnessed in the markets worldwide lately – I see more and more distressed opportunities that became such as a result of an avid optimism of entrepreneurs and bankers alike.

The latest one that hit my desk is based in Mexico. The company was acquired a few years ago by entrepreneurs with experience in the sector. The orignal trio of investors had planned a buy-out with some debt involved. Shortly before closing the transaction, the trio became a duo, and the bank happily lent a difference. Fast-forward a couple of years, the company is growing and needs more space. Its owners score a great warehouse and buy it.

“Want some debt with that?”, said the partnering bank(s).
“Sure, why not. How about financing 100% of the building’s purchase price” answered the entrepreneurs, happy to have found such a deal.

Then arrived 2014 and the Peso started to weaken against the Dollar. As the company imports a lot of its raw materials, margins started to contract. Some of its local providers went under, forcing the company to import even more than before, thus hitting it even harder. 2014 closed with a ratio of Debt to EBITDA of 13:1 and interest expenses higher than its operating profit. Naturally, 2015 looks even worse as its former partners, the banks, are trying to cut the cord, suddenly realizing that the company is over burdened and has a high likelihood to go under.

Here’s the thing, the entrepreneurs in this example may have been overly optimistic and, in retrospect, one can be quick to judge but in the heat of the action, it is easy for an entrepreneur to get all enthusiastic with a project, growth projections or other operating activities requiring just a bit more capital and promising a tremendous ROI.

For instance, in the example above, the building mentioned was, indeed, a good deal as it saved on rent and it could sell today for over 50% the amount paid on the spot, it just was not a reasonable investment for THIS company. Had the financial institutions been the conservative parties we expect them to be, they should have denied that loan instead of granting it with the building as a collateral.

In sum, it seems to me that the frequent announcements big LBO shops’ numerous acquisitions and other successful divestitures has somehow made people think that leveraging your company with debt is risk-free.

Don’t get me wrong, I think it is a folly to try to avoid debt at all cost when growing a business as the cost of your own capital is, and will always be, much higher than the cost of debt. I just believe that entrepreneurs just need to keep the right balance of equity versus debt where the stakes are high enough for them to be preoccupied for their personal wealth position should the venture have a negative outcome.

To put it more bluntly, I believe that, with the generalization of leverage buy outs in mass media, as the Debt-to-Equity Ratio increases, the perceived risk by the entrepreneur, from a personal wealth point of view, decreases. 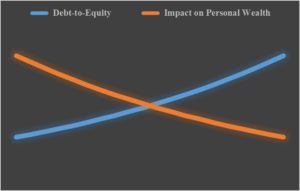 Summing up, here’s how I think the mind of many people now work:

… and it’s not the 2008 financial crisis that’s going to prove me wrong. After all, the key problem was that million of people bought houses they could not afford and banks could not careless because, for the most part, they packaged those loans in “securities” and offloaded them in the international markets… Other people’s money, other people’s issues…